“The fault, dear Brutus, is not in our stars,
But in ourselves, that we are underlings.”
—Cassius

The true content of character is a fascinating subject for writers. With good reason too: the depiction of fictional characters in prose, poetry, paintings, illustrations and numerous other art forms is a key way of encountering, understanding, and interrogating the human condition—storytellers have always been good at uncovering its virtues and vices; through their work the very best of them have encourage humanity to be the best version of itself.

What is a good man? What makes a woman bad? How do we deny some people the content and characteristics of common humanity and, in so doing, relegate them to the other? Do the stars align to make us typical Tauruses or do we define our own personalities regardless of whether Mercury is in retrograde? Do writers mould characters in their own images? And are they responsible for what they create?

These are just some of the questions that dog writers before, during, and after they put pen to paper. While some of these moral quandaries elude definition, it remains possible to make practical inroads into the writing process to create characters who are able to enrich and challenge the writer and engage and reward the reader.

In the second Doek Workshop, characters and their roles in storytelling are explored. They are dissected using practical literary examples to discover subtle differences between their existences in short fiction and longer narratives such as the novel. Most importantly, the workshop provides its participants with creative tools for conceptualising, synthesising, and realising compelling characters. 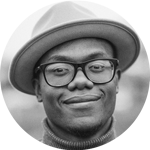 Rémy is a Rwandan-born Namibian writer and photographer. He is the founder, chairperson, and artministrator of Doek. He is also the co-founder and editor-in-chief of Doek! Literary Magazine.

“Highly recommended, for both the budding and veteran writer. It opens you up to new ways of thinking about writing stories. There’s a clearly defined structure to the subject matter and how topics relate and cohere, but the actual presentation of them is informal, which is by design, and it lends itself to an engaging way of absorbing the information and means on offer.” — Ange Mucyo, writer and network and systems administrator.